The history of Mustard’s Last Stand 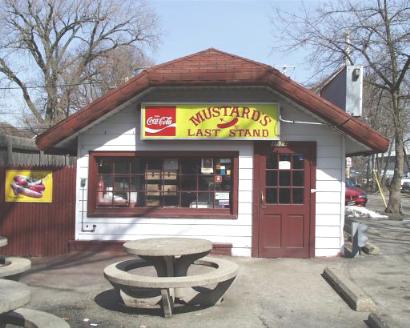 You should be thankful for 1969, because in that year an iconic hot dog restaurant came to Evanston.

The wildly popular Mustard’s Last Stand was created and founded almost 50 years ago by Jerry Starkman, at 1613 Central St. Since the family run restaurant was established, it’s become world famous, but its story is not well known.

“Mustard’s started 46 years ago when we had a pizza place down the street,” states Steve Starkman, the owner’s son. “We were going to move [the restaurant] to this location, but we still had a lease at our other place. So we opened a hot dog stand for the two months while we were waiting for that lease to expire, and we never changed it away from a hot dog stand ever since.”

Mustard’s would remain nameless for its first couple of years. Eventually, they issued a contest offering a $100 prize to whoever could best name the hot dog stand, the winner coming up with “Mustard’s Last Stand”.

The founding of Mustard’s isn’t its only interesting piece of history, the location has a fascinating past as well.

“It was a house before we got it, and before that it was army barracks,” says Steve. “During the war. They used to have tents set up on the parking lot of Northwestern, and this is where the nurses used to live.”

Today, customers only see a transformed building with red countertops, bright white menu signs, and the smiling faces of the Mustard’s staff.

“My grandfather did a lot of work in here converting it from a house to what you see now,” says Lonnie Starkman, the younger son of Jerry.

Mustard’s Last Stand has grown very popular among students, including students at ETHS.

Even though Mustard’s is most famous for hot dogs, they also serves burgers, sandwiches, salads, and more.

Mustard’s continues to provide quality and dedication to their customers as a family.

“It’s a family run business,” says Steve. “My brother Lonnie, my dad Jerry, our wives, our kids, everyone’s involved in putting out good food for people for 46 years.”