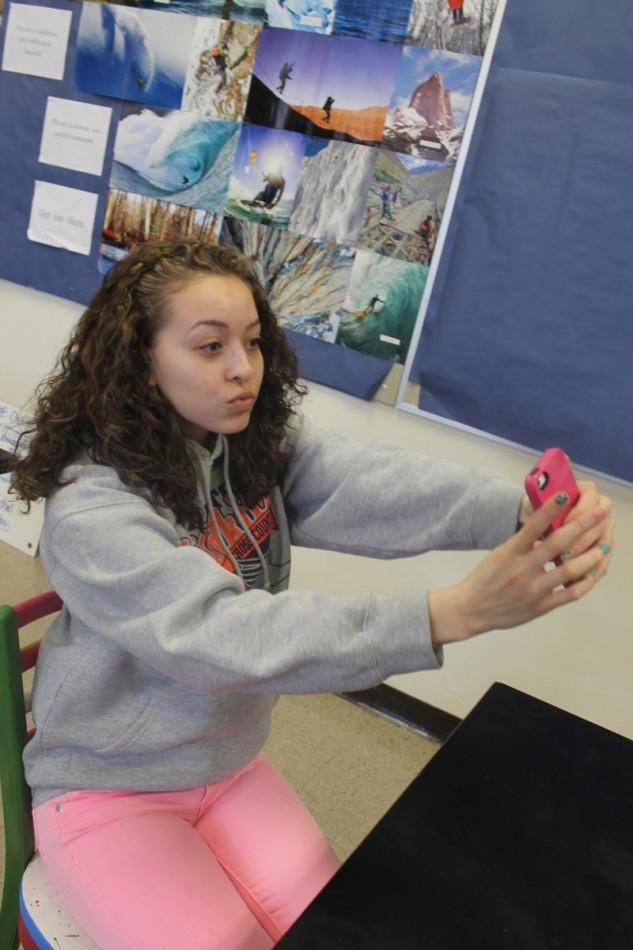 To duck face or to pout?

This question crosses the mind of teens everywhere thanks to the new selfie craze.

A nonstop stream of pictures of other people often influences one’s self-perception and esteem.

“You’re constantly in a position to rank yourself,” explains Jessica Herrmann, school psychologist. Some teenagers get down about things like how many likes they get on a particular picture.

However, some say selfies can create a sense of pride. When teens take their own pictures, they demonstrate self-confidence, which is a good quality during the vulnerable teen years.

Focusing too much on social media can cause stress.

“I think a lot of it is about reframing your thoughts and doing everything you can to make your identity not just your Facebook profile,” says Herrmann. “Acknowledge that social media is not a bad thing; it’s just one way to express yourself.”

Students also have suggestions for boosting one’s self esteem without using technology.

“If I ever have a bad day and then have a really good soccer practice it makes me feel better,” says junior Layla Werner.

Contrary to popular belief, both males and females take selfies, so the “selfie phenomenon” is not gender specific. Boys and girls are almost equally affected when it comes to this pressure in the media. In fact, 50% of men take selfies and 52% of women do.

According to Time Magazine, one boy in Britain attempted to commit suicide when he couldn’t take the perfect selfie. This is an extreme case, but it is evidence that for some, the selfie is becoming an active obsession.

Apps like “Skinneepix” and “Beauty Camera” allow users to digitally alter their appearance, whether by taking off 10 pounds or by removing facial features like freckles. In fact, 36% of people admit to retouching their selfies. This type of digital alteration can make people unhappy with the current way they look, especially adolescents.

Others believe that selfies are just selfies and they are nothing to be worried about.

“I don’t think selfies are an obsession,” says junior Nkem Ekwunife. “I just think people like seeing themselves.”

Whether or not selfies are harmful, they certainly are prevalent. 91% of teens in the US take selfies and 30% of pictures taken by people between ages 18 and 24 are selfies.