BCC is cleaner than you think 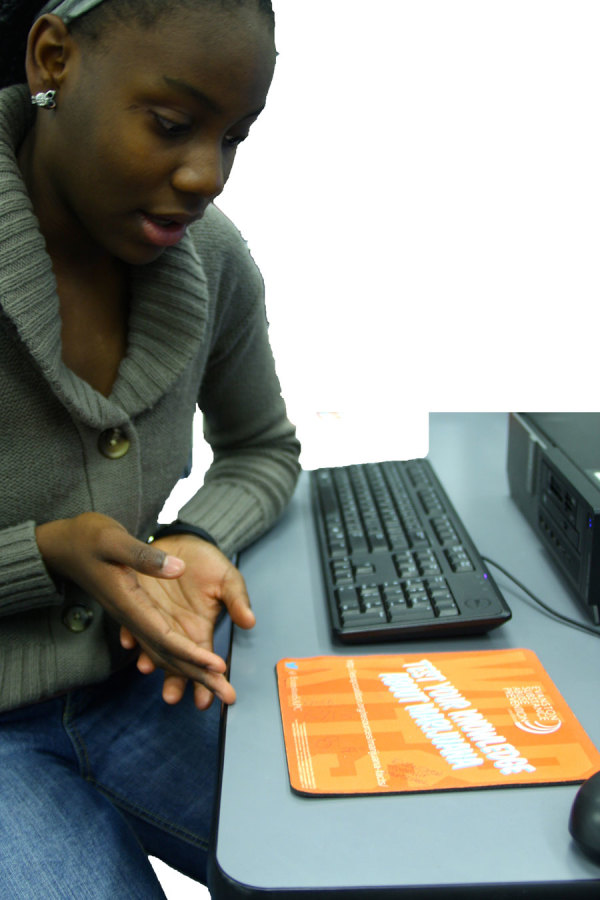 Sophomore Laurianne Pene marvels at the cleanliness of the BCC.

No need to bring hand sanitizer.
Despite what you might think, the BCC is no dirtier than an average classroom.

“There’s no real place where you’ll find every single thing spotless,” says BCC coordinator, Jasmin Hislop. “We live in that kind of world.”

It makes sense for someone to think that the BCC could be one of the less cleanly places in the school. With six computer labs and nine periods, the Bacon Computer Center has the possibility to hold hundreds of students every day. But the hidden heroes of the BCC do all they can to keep the labs as clean as possible. According to Hislop, students should think of the BCC as any other public place.

Some people can get queasy when it comes to germs in the lab. Obviously there’s no time for the BCC to be cleaned between periods. This means that whatever is on one person’s hands could be transferred to every other person who uses that computer. However, the BCC staff continuously orders hand sanitizer and have dispensers throughout the space–it’s up to the student to put these to use.

“We all take on extra responsibilities,” says Hislop. “At the end of each day, we push in all the chairs, and straighten all the keyboards.” Hislop adds, “Before school starts, Ms. Iverson and clean all the tables and computers with wipes.” She also mentions that Jessica Iverson, BCC specialist, will dust when necessary.

“I think the BCC is a great place to learn, but their water bottle policy, in all honesty, is a little dramatic,” says senior Fiona Egan. This is a shared view between many students. Anyone

who has lost 40 minutes of hydration to a BCC staff member gets frustrated. Hislop has good reason, however. With the great probability that something could spill, it’s not worth the risk.

“It could crash a keyboard, and that depletes our resources,” she explains. The policy with food is similar. Hislop explains how they allow students to bring their food up and have it wrapped until the end of the period.

The BCC is a place that is usually crowded and busy, but it can be just as clean as any other room in the school, it just takes a little more work. It’s clear that the staff of the BCC takes pride in the way their center is run and kept as clean as it is, considering the large amount of foot traffic. Ultimately it’s up to the student to keep themselves healthy in a school environment. And though you may get upset when your water bottle or snack gets taken away, it’s one of the best ways to keep the labs up and running and as clean as possible. So a class in the BCC isn’t going to put you at risk of getting sick more than any other classroom with shared desks and chairs.