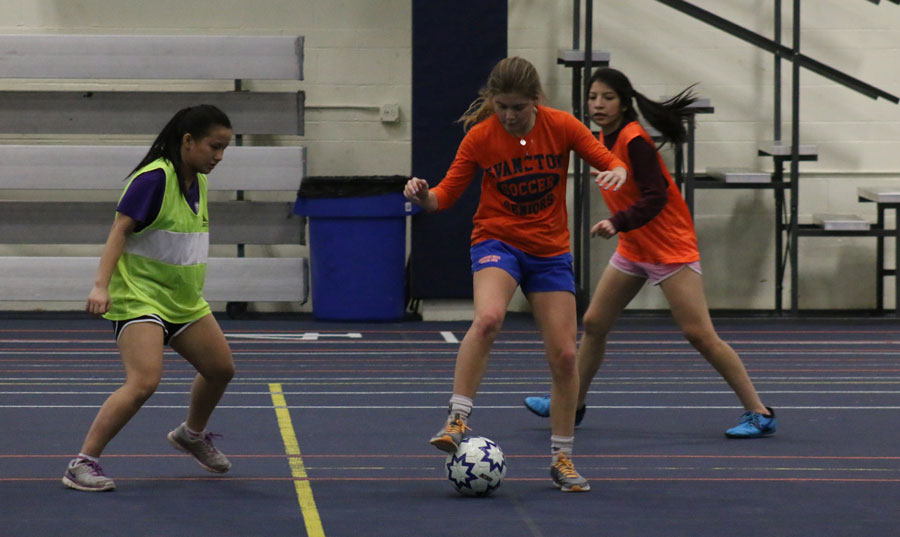 It is still freezing outside, but spring sports are gearing up to start their season, even though they may have to do so inside, depending on the weather.

“We know that it’s always going to be hit or miss so the years where it’s nice enough weather is a bonus,” states Athletic Director Chris Livatino.

ETHS is one of the few high schools with large enough facilities to have all its teams practice everyday. “For every week that we stay inside and the weather remains the way it is, is actually a benefit to us because we have facilities that other schools can’t even dream about,” adds Livatino.

Hats, gloves and coats are not the usual attire when playing a spring sport, but they are going to be necessary because the spring season starts so early. According to the IHSA, all outdoor spring sports start on March 2, with games commencing a few weeks after that.    Girls track has their first outdoor meet on March 14, when it is predicted to be 20 to 30 degrees.

Surprisingly, Livatino says that the coaches and athletes haven’t complained about their arrangement, but that doesn’t mean they’re content. Indoor sports get first priority to the facilities so many sports must attend practice from six to eight or even eight to 10, a very inconvenient time.

“Working in the small gyms helped a little with technical things,” says sophomore Lauryn Marriott, soccer player. “But once we got out on the fields we almost has to restart the training because of the difference between hardwood floor and the bumpy grass.”

Considering when to start practicing outside is also a topic up for debate by many students. “It starts to get about 50 degrees outside and everyone thinks, ‘oh it’s great, we should be outside’, and the snow is just melting and so the ground is really susceptible to damage,” says Livatino. ETHS have a multitude of fields but they must be used by all outdoor sports, so they get torn up easily and will stay torn up throughout the season.

“In softball, the conditions of the field has to be pretty good for us to play,” says sophomore softball player Megan Chambers. “If there’s snow on the ground, we can’t play, so usually our games are rescheduled to the end of the season,” she adds.

Last year because of bad weather, girls freshman soccer lost one game entirely because they couldn’t reschedule and girls lacrosse had to move games as well. Varsity boys baseball also had to reschedule the first three weeks of their games because of the weather. “Baseball and softball were probably hit the hardest, soccer and lacrosse were probably the next tier to get hurt by it,” states Livatino.

A lot of people are also angry that their sport is in the spring when the weather is so bad. “Being able to practice and train twice a day, outside, like the boys might lead us as far in our season as they went,” states Marriott. Boys varsity soccer spent their whole preseason outside, while girls soccer and all other outdoor sports will most likely be spending it crammed into gyms with at least 15 other athletes.

Evanston is very lucky compared to many other schools in terms of our facilities, which gives us a benefit other schools don’t have, but that’s not a sure sign that we should start earlier. It all depends on the weather, which is very unpredictable and therefore it’s hard to lean one way or another too much.