Students get their fix for a 36 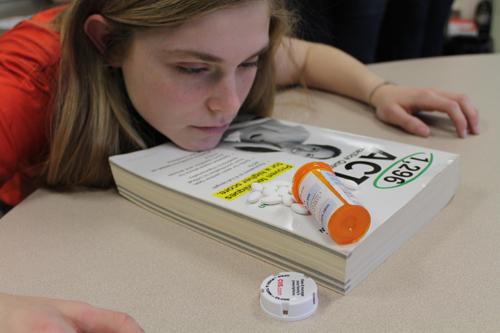 John Doe has spent the past year diligently taking practice tests to get a high score on the ACT. Jane Doe wakes up and swallows an Adderall. Jane and John get the same score.

ADHD medications like Adderall are amphetamines, which increase a person’s focus drastically.

“I had to do a group project with a couple friends that we knew was supposed to take a while, and no one really wanted to do. Someone suggested we take Adderall…We finished in about half the time it would have taken us,” tells an anonymous junior boy.

Adderall is effective in the short term, but not so much in the long run.

The Drug Enforcement Administration lists such stimulants as Class 2 controlled substances, with the consequences of un-prescribed possession equivalent to those of cocaine and morphine. Thus, selling Adderall is a felony.

Despite these setbacks, the trend is continuing upward, with 7.4% of high school seniors using Adderall unprescribed in 2013, a two percent increase from 2009, according to research at the University of Michigan.

At a time when pressure from colleges, parents, teachers, and extracurriculars are at an all time high, individuals are finding Adderall necessary to get that A, sacrificing mental and physical health in the process.