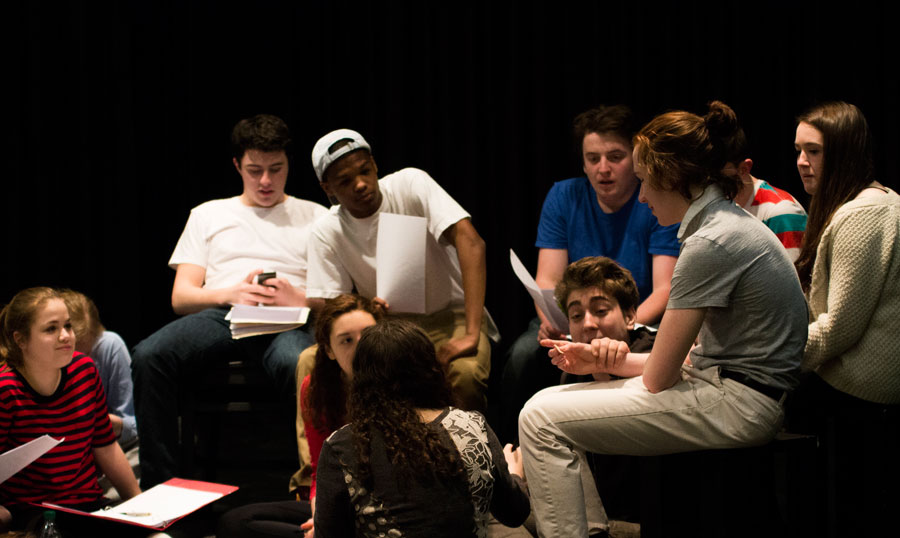 Writer's Showcase Board painstakingly discusses pieces in the show.

Don’t forget to write down to see Writers’ Showcase this March!

“Writers’ Showcase is a performance of student written work directed by students,” says Lisa Oberman, sponsor of Writers’ Showcase for 29 years.  “There is no overlying theme but it captures student voices through writing.” This year will feature a wide range of unique pieces that span across many genres and explore a diverse number of topics.

“It is a mix of serious pieces, comedies, essays, scripts, diary entries, we got a DBQ last year,” says senior director Becca Westphal. “Some are personal, some deal with experience, some are political, some are humorous life experiences everybody encounters… they are representative of the thoughts, feelings, ideas, and opinions of the students,” says Oberman.

The production itself is very low budget and had few props or costumes. “The show is smaller and simpler, it is focused on writing and acting,” says Oberman.

Writers` Showcase takes student works and transfers them into a production as interpreted by student actors and directors. “It’s completely student run, I don’t have a hand in the selection or directing,” says Oberman.

The process starts with a board of students who pick through the 300 plus works they receive and choose 20 or so pieces for the show. The pieces are stripped of their author’s name so as to ensure fairness. “The board sits down and chooses what makes up the script,” says Oberman.

After the pieces are selected, the actors must come up with stage productions for each work. “Directors assign roles to each piece and interpret them, telling everybody where they need to go,” says Westphal. The actors and directors come together to brainstorm how they can put the piece on stage. “The whole thing is a collaborative because the actors have their own ideas and they can interpret it as they choose,” says Westphal.

The interpretation makes for some interesting productions. “A work may be serious but changed to humor,” says Oberman. Some pieces also need to be edited. “Some pieces are very long and need some cutting,” says Westphal.