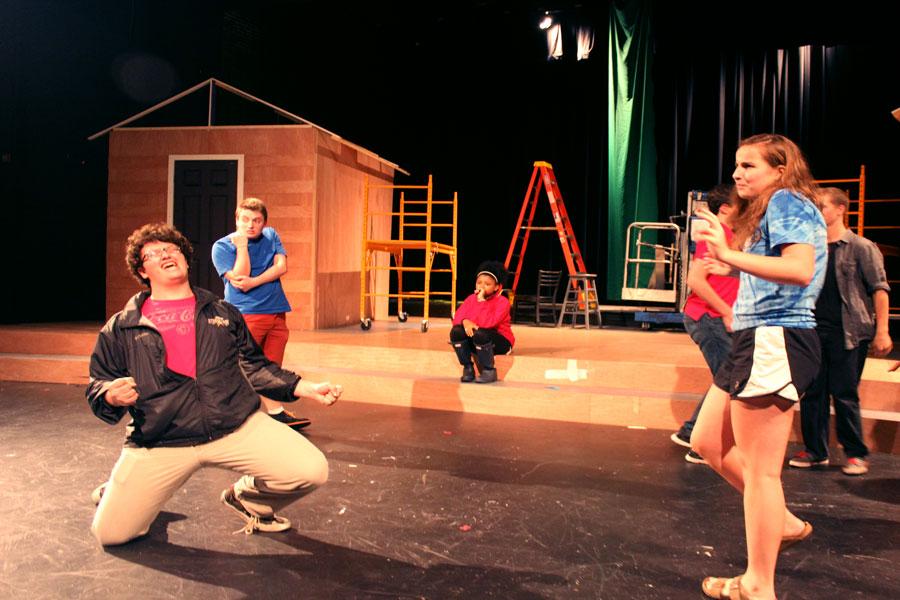 School may be slugging along, but YAMO is taking it back to summer camp.

The student run comedy show, YAMO, has been a long standing tradition in school history. While an ETHS annual staple, the production always has unique qualities.

This year the theme for the show is “Camp YAMO.” The show will be focusing on heartfelt and sweet moments that convey the innocence of camp. “The characters created are slapstick, funny, and weird,” says senior co-general director Jacob Bond. “They are more like real, true people and not characters.”

YAMO is run by a student board and the material is all original, student-written work. “There`s danger in doing YAMO; there`s no safety net,” says co-general director and senior, Emma Chanen. “There are problems with scenes, jokes change, actors change…it`s a work in progress.” YAMO, along with Writer`s Showcase, are the only two student-written shows at the school.

“They have ownership of production,” says Timothy Herbert, an ETHS teacher and director of many theatrical productions at the school. “Student voices are a serious tradition in the fine arts department.”

YAMO, compared to other shows, is a lengthier process. “A regular show takes two months tops, while YAMO takes seven to eight months,” explains Bond. The student board has been collaborating for this extensive time to put on a performance that lasts but seven shows.

There are a variety of changes to the production this year. A new company has been added called “unexpected.” A part of YAMO over 20 years ago, the unexpected have been brought back to specialize in musical numbers. There are also fewer musicians and writers this year.

The camp theme has been further integrated into the show. “We’ve all been involved in past productions,” says Chanen. “It will be hard to say goodbye, camp is the perfect metaphor for that.”

YAMO, due to being completely student written, is different than other theatrical productions at the school. “Plays that have already been done are tested, true material…an original comedy show from scratch feels more dangerous,” explains Herbert.

Even stage crew runs differently during YAMO season. “There`s more freedom to voice an opinion…It`s unified and connected,” says senior crew member Natalie Cleland. The sets for the show are designed by YAMO`s technical directors and later built by members of stage crew. “There’s a lot of ways to incorporate the camp theme with the set through lighting, color, and set design,” says fellow senior crew member, George Seibold.

The show, however, does have some faculty involvement. “It`s impossible to not do anything,” explains Herbert, “staff is always watching scenes and getting material to standard.” Still, the show is a total effort revolving around student involvement.

“Some years are better than others, this year is better,” comments Herbert.