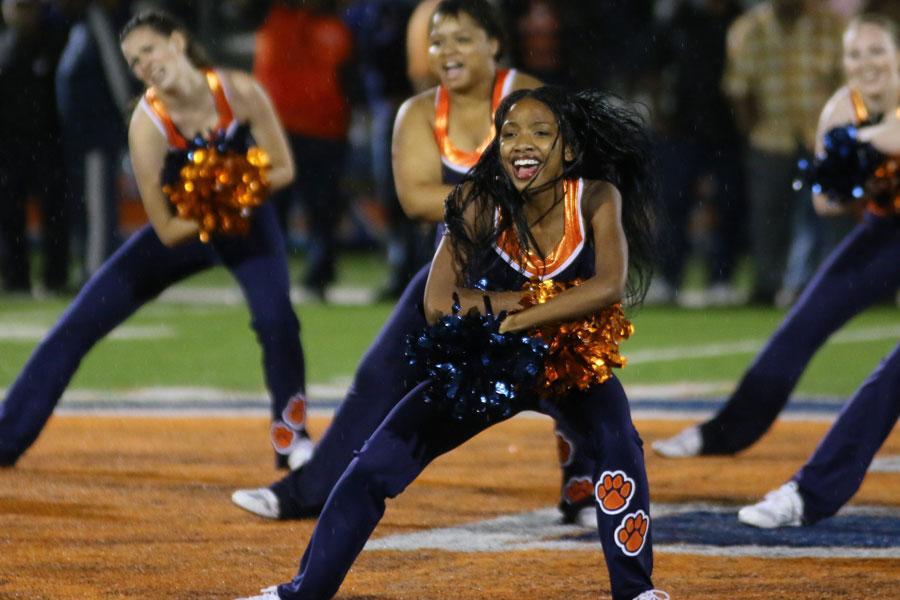 ETHS fans heavily anticipate the performances but it’s the effort behind the scenes that makes them so engaging.

“I love their energy,” Says sophomore Tessa Otting. The Pomkits always captivate the students in the stands. “I actually pay more attention to the Pomkits than the game because the music starts playing and everyone starts cheering.”

The dancers on Pomkits choose their own songs and choreograph their own dances. “Making up dances is fun because you’re in control of the moves and songs,” says Maddie Miles, a junior on the Varsity team.

Their power to create the routines themselves is key for the team to feel motivated. “They love choreographing,” explains coach Erika Cruz. “It’s definitely a good learning experience, it improves their musicality.”

“The girls bring up songs, they vote on the songs, but in the end I approve all the songs,” states Cruz. Cruz adds that the songs all need to be appropriate, high energy, and loved by the crowd.

As important as the music or dance are the Pomkit’s attitudes. “Mistakes will happen, but it’s how you fix those mistakes,” says Cruz. Cruz says it’s most important for the girls to have fun. “You have to dance from your heart, because that’s what dance is. The crowd can tell whether or not you’re having fun by just the expression on your face,” Cruz continues.

No matter what mood a Pomkit might be in, they know they have to pull it together to make a good show. “If we have a bad day, we go to practice and work hard if not for ourselves for our teammates and our school,” says Miles.

The Pomkits practice hard. Putting in around nine hours per week in addition to performances, the dances are physically grueling. “Dancing isn’t easy,” explains Miles, “Sure we only get to perform for three minutes, but the work that goes into that performance is more than others can imagine.

Over the summer I trained them to build their endurance,” says Cruz, “It takes a lot of endurance and strength in general to last a three minute routine.” The Pomkits need these capabilities to engage the crowd in their performances.

Even with the physicality of dancing, the Pomkits determinedly push through. As Miles says, “It’s all worth it to hear the crowd chant “We want Pomkits!” as we run out to the field, heads down, ready position, and wait for the music to begin.

As for their up-coming pep-rally performance, their songs and moves remain a mystery. As junior Pomkit Katy Flood says, “They’d kill me if I told you,” so the Pomkits fans will just have to stay on the edges of their seats until then.