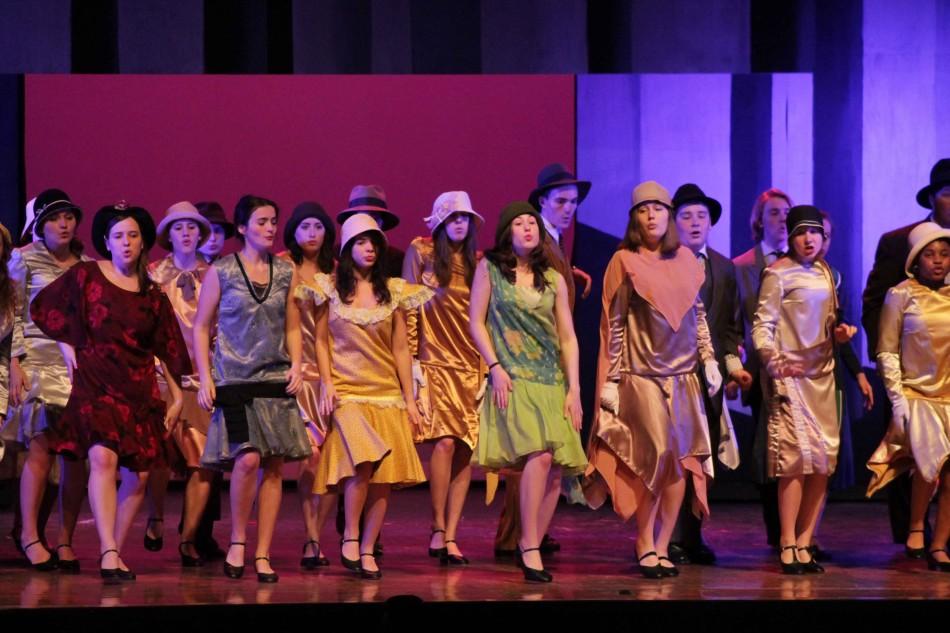 Members of the Millie ensemble Practice the opening number.

If you enjoyed past school musicals, be ready to have your socks knocked off by this year’s play, Thoroughly Modern Millie.
There’s been Hairspray, Little Shop of Horrors, and many others, but none can compare to this year’s fast paced musical.
Thoroughly Modern Millie, set in 1922, is about a young girl named Millie, who moves from a small town in Kansas to New York City. She comes with the plan to marry a man solely for money, not for love. This is a crazy notion in the 1920’s, when prohibition is in full swing, and women’s rights are scarce.
Simultaneously, there’s a different plot. The woman that owns the hotel Millie is staying at, Mrs. Meers, is running a white slavery ring, where she drugs and kidnaps some of the girls in the hotel and sells them for sex in China.
“There’s about 60 people [in the musical]. Everyone’s so talented. There’s not a weak link. When you’re there, you’re there to make the show a better place. Everyone makes the show what it is,” says Lucy Godinez, senior.
Lucy plays the part of Millie, alongside Harry Thorton, junior, who plays the charismatic love interest, Jimmy Smith.
“The play’s really fun because it’s a homage to the screwball comedies of the 30’s and 40’s. Stylistically, it’s super-fast; it has a ton of energy, and even though it was written in 2004, it has the feel of something that was written back then. It has a fun, classically funny feel. The music’s great too,” says Harry.
The cast of the play has been working round the clock to put on the best show they can. They’ve had rehearsals for weeks, practicing every day after school from 4-6:30. The music is very upbeat, and the dance numbers are very big.
“It’s like training for a marathon,” says Lucy, “You run a little bit every day and eventually it wont feel that difficult. It’s the same with singing, because your voice is totally a muscle. I would practice a little bit every day, and eventually I built up the stamina to push me through 13 songs.”
Not only did the cast members all train tirelessly to sing, they worked hard to learn how to put on each of the dance numbers. The whole cast was taught how to tap dance and many rehearsals were dedicated to learning the right steps.
“Learning how to tap dance was a great experience because it allowed me to put my percussion education to use with the added coordination of using my feet instead of my hands,” says Daniel Antman, senior and cast member. It was also incredibly fun to dance and make rhythms at the same time, and with the full orchestra it sounds amazing.”
All the hard work has paid off, and the play has officially come together. The show opened last Friday, April 25. Come see the musical this weekend, on May 2 or 3. Tickets are only $12.