Jacob Bond on track to success 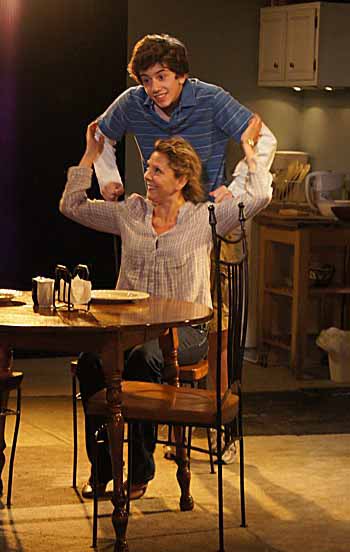 Courtesy of the Red Twist Theater

Most students have dreams of growing up and doing what they love for a reasonable salary, and junior Jacob Bond could already be on track to success.
An actor since age 8, Jacob began acting with Evanston’s Mudlark Theatre Company.
“Mudlark is a great children’s theatre company that I worked with until I was a freshman,” says Jacob, who landed a lead role of Artful Dodger in Oliver! his freshman year.
Later that year, Jacob was signed by Chicago’s own Stewart Talent.
“For a job, the time commitment varies all the time,” states Jacob. “I could have five auditions a month or zero auditions a month; it all depends on what is casting when.”
Jacob’s time with Stewart helped his get two lead roes in original onstage productions, a place in a Country Financial commercial, and a role in a short video for The Onion.
“My biggest part has probably been Charlie in The Beautiful Dark, a show I was in this summer at the RedTwist Theater in Chicago,” says Jacob.
The Beautiful Dark is the story of a boy who was kicked out of college and comes home to live with his family. Charlie (portrayed by Jacob), is the other son of the small family and idolizes his brother.
In the play, we see Charlie get abused until permanent damage is inflicted.
Now, Jacob is rehearsing process for A Place in the Woods, where he has just been selected to play a lead role, once again.
“A Place in the Woods is a family drama actually written by the same playwright who wrote The Beautiful Dark,” explains Jacob. “It focuses on a father and son who have to come back to the father’s childhood home and take care of his mother (who is suffering from dementia). I play the son, Alex.”
Jacob explains that, though he loves on-stage acting, “I am also am a huge fan of the realistic and subtle side of film acting, which doesn’t really work on stage. To continue doing film acting would be my dream job.”
Jacob Bond is on track to pursue a career in acting, and his dream of becoming an actor certainly seems attainable.